December 2007 Hunter was 5 and started having problems with stomach aches, going to the bathroom, and turning a ghostly pale white. After FOUR times to the emergency room with a misdiagnosis 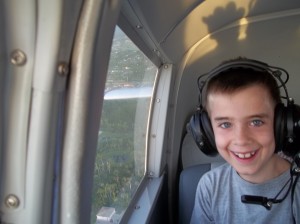 each time we found out January of 2008 he was stage IV with Burkitt’s. Our lives were changed forever.  We started at Buffalo Children’s hospital of Buffalo, NY. The tumor was attached to his small intestines.  After the first round of chemo, his kidneys shut down and he went into kidney failure due to the tumor lices.  His blood pressure went way high and he ended up with swelling of the brain and ended up coding on us and then went into in a coma.  2 days in the UCI his kidneys started working and by the grace of god he woke up. Hunter had an allergic reaction to alot of the meds which caused numerous problems such as collapsed lungs. We were then transferred to Roswell Park Cancer Institute.  Hunter never smiled, laughed or talked to anyone the whole first 3 weeks we were at the hospital until one day a paper airplanes was flown at a incoming doctor. It was the first time he giggled so that started the airplane cancer goal. Burkitts made into  the spotlight in NY that year with Hunter.  After being aired on CNN, ABC, NBC, CBS, FOX, and the cover of yahoo, and Guinness Book of World Records we ended up with 2.8 million airplanes from all over the world.  Hunter is now 9 years old and the best “brat” a mother could ever ask for.  The burkitt’s Lymphoma Society has been not only a blessing for me and others but it has helped me GREATLY with helping others cope and talk with other mothers who are currently going through treatments with their children.  It has been such a blessing to meet others who have dealt with the same things but in different ways (as bad as that sounds). I wish we had a different meeting story but it is what it is. stinks.  It has also been a good thing for Hunter because he has been able to meet other kids that have been through cancer.  I wish everyone had a good outcome.  Someday everyone will. But our motto in our family is.. Cancer suck but CanCer-vive! <3

Here is a video we found back when Hunter was doing the paper plane drive.

And here is a link to the story.