For a month our 11 year old son, Logan complained of pain in his stomach.  He missed about 12 days of school, but never seemed to feel any better.  His doctors diagnosed him with constipation, which we treated, but he never felt any better.  Other doctor visits resulted in suggestions like, “eat a cheeseburger and get some sunshine.”

Logan insisted, however, something was wrong and he needed help. He found a hard mass in his side, and asked us to feel it, but we weren’t able to feel it, (because we didn’t want to push too hard on his 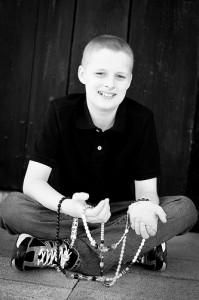 Finally, a doctor who knew something was very wrong. The doctor ordered an MRI, which revealed intesisception (a telescoping of the intestines, which severely constricts flow), and sent us to the UK for what he considers to be the best in dealing with this kind of ailment.

Logan was admitted to UK Hospital for surgery on June 7, 2010.  Logan walked into Kentucky Children’s Hospital for what we thought would be an overnight stay to fix an intussusception with a fast easy enema. That is not what happen.

By the end of that first week in the hospital we knew something was very wrong with Logan. Logan was having a very tough time recovering from his initial surgery. He was still retaining fluids, had gained 17 pounds in water weight. His intestines were not yet functioning, and his pain was increasing and his mobility was decreasing. His heart rate and breathing kept crashing and setting off alarms, they could not get his fever or pain under control. Our sweet boy was very sick and we knew if something was not done soon my son might die. Early on a Friday morning I had just drifted off to sleep after a long sleepless and painful night for Logan when I was woken up  by Logan’s surgeon  and a whole gaggle of other medical staff and social workers invading Logan’s tiny hospital room with bad news.  Lab results had come back, and the mass removed was Burkitt’s Lymphoma.

Logan in one year endured 46 IV starts/pokes, 107 painful dressing changes of a massive wound, 15 surgeries, bone marrow biopsies, 48 nights in the hospital, 2 trips to the ER, too many doctors appointments  and x-rays to count, 2 blood transfusions, 2 types of central lines placed and removed, 14 times he had to sit while chemotherapy races into his sweet little body, 13 infusions, 23 scans, many shots and a  month of IV antibiotics given at home by mom and dad, countless days and night of extreme belly pain, a cancer survivor, a family that is forever changed and a deep understanding that God is good all the time.

Logan’s story goes on. He is a survivor. We will watch him grow and do great things.
http://www.caringbridge.org/visit/loganweileriv/journal

3 thoughts on “God is Good all the Time! Logan’s Burkitt’s Battle.”