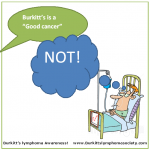 “You have Burkitt’s lymphoma.” What the heck is that? That is what my reaction was when I found out that I had Burkitt’s lymphoma. “It’s a type of Non Hodgkin Lymphoma that is very rare and you are the only one in 20 years that the Hospital has seen” My Oncologist said. One of my only questions was, what are my chances of survival? He said “About fifty-fifty,” and according to SEER he was right for my age group and stage.

Burkitt’s is a curable cancer, because it is so aggressive. Chemotherapy targets fast growing cells and Burkitt’s lymphoma is one of the fastest growing there is, so it can respond well to treatment. That said, the five year relative survival rates for all ages combined is just over 60% ( according to SEER otherwise known as “Surveillance, Epidemiology, and End Results Program”) Relative Survival rates are considered the Gold Standard when comes to statistics.

This cancer spreads so fast that it can get into vital organs very quickly and become wide spread quickly. The chemotherapy is very aggressive and very toxic and are some of the most aggressive treatments there is.  Complications can develop from the protocols. Infections can develop during treatment too especially during the nadir period (When you have virtually no immune system) and infections can be of great concern during the entire treatment process. So besides the cancer, there are other issues that can come about and you know the old saying that the cure is worse than the disease? Well in this case the disease is worse than the cure, but the cure can be very bad.

What does all this mean?

This disease is not to be taken lightly, ever. Yes, it is curable if you have Burkitt’s and you can be cured at any age and any stage, but no matter your age or stage make no mistake you are at risk.