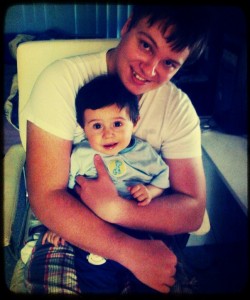 My journey with Non-Hodgkin Burkitt’s Lymphoma started when I was 19. It began with mild abdominal pain on my lower left hand side on Boxing Day of 2010, of course I didn’t think much of it however the pain was getting harder to ignore as each day went on. At week six the pain was so bad it was beginning to cripple me so I went to my local General Practitioner with a lot of worry and speculation, the doctor sent me for tests such as an Ultrasound because my older sister has Chrone’s Disease (which is inflammation in the small & large bowel) so naturally I was worried about my health I didn’t know what to do.

In late January I went in for my Ultrasound, I was very nervous grasping my mother’s hand with immense worry. I got called in and the nurse began the test, initially he didn’t see anything out of the order, however he said to me my doctor ordered an upper abdominal test, rather than a lower but he said “I’m not meant to do this but I will anyway” turns out he found something he himself couldn’t wrap his head around so he asked for the specialist which isn’t a good sign, they asked me all these questions about my sisters Chrones Disease and later on they demanded I got a CT scan done.

The Monday after my Ultrasound on my bowel, I was awaiting for my results however that day I began to get really bad diarrhea pain so I rushed to the bathroom and I noticed the toilet was covered in fresh blood, I began to cry and I felt helpless, I had no idea what was happening to me. I rushed to my doctor again, and he told me the results which were not looking good. He began his sentence with “your bowel is beginning to die, you have an intussusception of the bowel and it’s telescoping in on itself you need to be operated on immediately”.

On February 12th 2011 I had the operation, they fixed the intussusception and they removed 11cm of my large bowel and 3cm of my small however they told my parents they found a tumor the size of an orange inside my large bowel it was the cause of the intussusception, the bowel basically thought the tumor was food and it kept trying to swallow it resulting into the bowel telescoping in on itself. So after the operation I was recovering very well and very quickly I had to stay home and rest for six weeks, the doctors who operated on me said they’d call me in 2-3 weeks with the pathology results. A week went by, and the phone rang I was on the computer and mum was vacuuming in the kitchen, I answered and the same doctor who operated on me told me to come down as soon as possible they have the results, I honestly didn’t think anything of it, however it was serious news, news that changed my life forever. The doctor sat adjacent from holding his doctor notes and the results and he said “Unfortunately, I have some bad news you have lymphoma” I didn’t know what lymphoma was until I saw mum crying which clearly meant it wasn’t good. He told me it’s a type of blood cancer, and I needed to begin Chemotherapy as soon as possible so immediately I froze, I went numb and felt like a million responses were running through my body all I could manage to do was cry and cry and cry, the natural response was “why me, what have I done to deserve this, am I going to die?” but deep down I knew I was going to be okay it was a battle I needed to face and one I felt accomplishable especially because I have amazing support surrounding me.

Before my chemo started I had to get a PET scan performed to see where the cancer was in my body fortunately there were maybe one or two cells floating around however I had a glowing nodule In my thyroid, which was left alone to see if the chemo successfully removed it. In late march, 25th I believe, I began my first round of Chemo, I was having three rounds of immense treatment, I responded well to most of them however the killer amongst the pack was the Methotrexate with was administered over 24 hours in the later stages of each round. It completely ulcerfied every tissue lining throughout my body including my mouth so eating was very difficult and I lost about 20 kilo’s, I was about 88 kilo’s and went down to 65 kilo’s.

After treatment which was finished late June of 2011, I was told I was in remission and have been for 15 month now. I put on all my weight again, went back to my life job which is Visual Arts, and finished it with great pride, however I was referred to an endocrinologist for this nodule that was enlarged in my thyroid and after a couple of appointments I was told if the nodule is the same size as the previous scan we would leave it alone and just monitor it, which after the few tests I had done the nodule was the same size as before so in a way it was a good sign that it wasn’t growing. But after the results came to my specialist he asked me if I wanted to take this investigation further with a biopsy to rule out any cancerous activity, he said I probably didn’t need to have it but a voice told me I should and I did, luckily for me I made the right decision the biopsy showed a carcinoma which was the nodule. In the following weeks I had an operation of a total thyroidectomy and the pathology results showed papillary thyroid cancer on the right side, and a beginning of Follicular thyroid cancer starting on the left. I am now very much happy with how my life is, I am taking daily medication for having no thyroid and I’m beginning a full time Bachelor course in Fine Arts now, I’m hoping 2013 and the rest of my life is all surrounded with happy and positive energy. I have learnt so much from this experience and have lost a great deal to Cancer, so my life is walked with pride and a fighting spirit for me and my friend.

Id just like to say thank you for reading my story and a big thank you to the medical staff I had throughout my stay in hospital without modern medicine I wouldn’t be here typing my story to you amazing people who have also battled it, In a way I’m happy other people have gone through a similar journey because now I don’t feel so alienated, and I can talk to people who understand the trauma I went through beginning, during and after this whole episode.

3 thoughts on “My battle with two Cancer’s.”