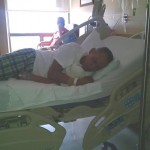 Hi my name is JoAnn DeLeon. Jerry DeLeon, my brother has always been an amazing brother and person . He is a loving, caring, and compassionate individual who loves life and will help anyone in need. He has so many people in his life that have the best memories and regard for him. About two weeks ago he was complaining about back pain the doctors would give him steriods and pain medicine which did not help. After two weeks he finally went to a different hospital emergency room they ran tests on him and pre diagnosed him with cancer. Further testing would confirm he has Burkitts Lymphoma Cancer. Within a few days he went from stage 2 to stage 5. Meaning the Cancer has been detected in his marrow and brain. The doctors have started him on very aggressive Chemotherapy because his Cancer is a very rare and aggressive kind.

>
>
My name is Kayla my fiance name is Ryan. Ryan was diagnosed at age 22 with burkitts lymphoma stage 4 on june 10th 2014 Ryan was one of the worst cases the ever seen the first week they started chemotherapy I almost lost my other half he had kidney failure an was so swollen every where I stayed with him in the hospital room till he was released about 2 weeks later ryan has been strong threw this stating the whole time iam strong than cancer it aint gonna killed me iam gonna beat its but sure enough oct 26th no site of lymphoma but with this last round of chemotherapy in his port he got sick an was puking an didnt wanna eat was less active ryan has to go threw intertheoal chemotherapy 2 more times which is where they take fluid out of his spin an put chemo in it ryan has been having a hard time financially because when he got the cancer he had to quit his job because this cancer effects the immune system he gets sick he can die he is waiting to a decision for temporary disability they said the decision can take up till dec 15th 2014 he only gets it till he can work again he can start work again on july 15th 2015 money is the main issue I dont make that much its a struggle an I try my best to get him where he has to go an what he needs Ryan has such a high spirt his story was life changing from going to puking 12 time if not more a day to every once in awhile to none he has pushed threw so much he misses work a lot he is so ready to go back if anyone can help him that would be a huge blessing God bless an thank you for listening to Ryan Story

Our neighbor and very good friend has a son going threw this horrible fight right now. He seemed like nothing bothered him rode to work everyday and enjoys riding his motorcycle with friends and family. Never did we know this would happens to someone we knew and so young. His son was diagnosed with aggressive burkitt lymphoma just last week. They have been so worried for their son. I have never heard of this but in the week he has had 3 treatments .of chemo and has to let his body rest before they can do anymore. I know all we can do is pray the good lord above and see what comes.

This story is not about me but rather my sister, Roberta or Robbie, as she’s known to most. It all started in February when she noticed a mass in right submandibular area. She went to the dr and was treated for a salivary gland infection. When it didn’t resolve, she called me and asked what I knew about salivary gland infections. I work for an ENT and know all too much about these sort of infections. My dr was out of town so we had to wait a whole week before seeing her in office. This was the longest week of my life!! We did the first biopsy of her lymph node in office and waited another incredibly long 3 days. The first pathology report came back as an inflammatory process and we treated once more with antibiotics. I checked in on her daily. She was hopeful that the antibiotics were doing their job. And they would have had it been an infection. Her lymph node was unchanged so we ordered a second biopsy. After another week and a half, we had our diagnoses of Burkitt’s’. My sister was very confused because she has always been a very healthy person and didn’t feel sick prior to her being diagnosed. She went and met her oncologist and the people she would get to know very well over the next several months. She has maintained her courage, strength and spirit like a champion. Like an athlete training for a marathon. She has just recently finished her fourth and hopefully her last cycle of chemotherapy last week. She sports a wig or a wrap on some days. She also likes to feel the wind on her bald scalp. She looks forward to having a haircut and getting highlights. So do her two daughters who have been her biggest cheerleaders. They have been just as strong as their Mom through this experience. My sister deals with most, if not ALL the side effects they warn you about at the beginning of treatment. She doesn’t like to complain….much! Ha! She puts on her makeup almost everyday and goes to work most days. She has a spirit about her and looks forward to the day when she can look back and this be a distant memory for her. She has an excellent prognosis! No other activity on her last PET/CT. We’ll take that kind of news any day. I have learned many life lessons from watching her battle this disease. She didn’t want pity, she didn’t want tears, she didn’t want people to look at her like she had cancer. She wanted everything to be normal. But I think she did all of that, for all of us! She has had her catheter removed and has only a few scars on her upper chest. These are her battle scars. My sister is one of the lucky ones. Isn’t that an ironic statement….most people would consider cancer unlucky but we know God never gives us more than we can handle and He definitely carried her on this journey. God is great. My sister is pretty awesome too. Congratulations to my sister! This is her victory.