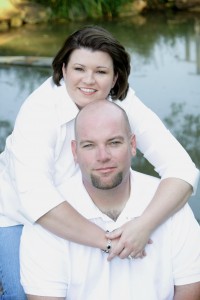 My name is Hayley Howell and my husband, Brian Howell, was my best friend, my rock, my soul mate. We were a young and very happy couple. Little did we know we would know the words Burkitt’s Lymphoma very well, very soon. Brian was diagnosed with Burkitt’s February 10, 2010.

He underwent 4 rounds of Hyper CVAD and one round of RCHOP. Unfortunately, after a very long nine month battle, Brian passed away September 22, 2010.

Our nightmare all started back in December 2009. Brian always threw his back out once a year. And this time it was very different. After being miss diagnosed twice and being in the emergency room three times, he was finally diagnosed with Burkitt’s Lymphoma.

Treatment started right away after the final result of numerous tests were performed to make sure Burkitt’s was indeed the correct diagnosis. Brian lost over 130 pounds during his illness and fought a very courageous fight!

As his wife, I stood beside him being his caregiver, patient advocate and best friend. We were trying to start a family when Brian became ill. We were married a little under 3 years at the time of his passing and were together for four beautiful years.

Since Brian’s passing I have written about our beautiful love story in the published book Unwritten: A Love Story which is out on Amazon.com and is available on kindle and the iBooks. Brian knew that I was writing this love story, this testimony of the fight to make it through such a horrible disease. I think  he would be proud of the work I have done to bring awareness about Burkitt’s and telling our story.